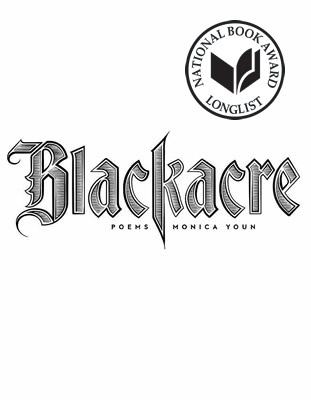 As Youn explains in a note at the end of the volume, the term blackacre is used in the legal realm to refer to a piece of land. She likens the use of the term to the generic name John Doe, used to refer to a person with an unknown identity. But perhaps most importantly, she describes the term as one that functions like a secret code for people who gone to law school.

The collection is composed of a few sequences of poems, starting with poems centering on the scene of execution and most powerfully, in the sequence of poems around blackacre, whiteacre, greenacre, etc. In these -acre poems, Youn takes up an extended engagement with the English poet John Milton and his grappling with his blindness, exploring her own experience of infertility and all the messy meanings attending bodies.

Here are some interesting links about the book: