Sequoia Nagamatsu's Where We Go When All We Were Is Gone (Black Lawrence Press, 2016) is a fascinating debut short story collection featuring Japanese folklore in a modern context. 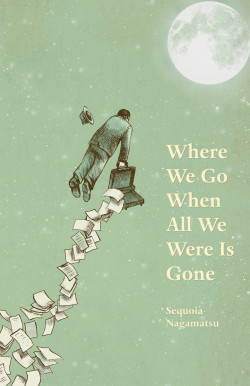 Monsters, demons, and otherworldly creatures live alongside humans in modern-day Japan, sometimes as oddities in plain sight and other times hidden from most people's views. Nagamatsu's stories also take on interesting forms, such as the opening story, "The Return to Monsterland," which alternates between letters a mother wrote to her daughter, the mother's field notes of different monsters as a scientist who studied Godzilla and other nuclear-weapons-created monsters, and the narrative perspective of the father who raises the daughter alone after the mother's death at the hands of Godzilla.

The stories sometimes take on the narrative distance of scientific (or anthropological) observation, and at other times they take a more intimate perspective of the creatures themselves. One story, "The Inn of the Dead's Orientation for Being a Japanese Ghost," also takes the second-person point of view, with the narrator as a ghost addressing you as a newly-made ghost. The story, like "The Return to Monsterland," also serves as a kind of catalog of creatures in describing different types of ghosts and offering case studies of specific ghosts of each type. There are also pages that provide the answers for Q&A (but not the questions, inviting the reader to speculate on the questions the new ghosts might be asking).

As fantastical as the stories are, they ultimately examine how human individuals and families live with (and without) each other. The creatures function in a few ways in the stories but mostly serve to reveal some of the pathos of human existence. For example, in "Girl Zero," a grieving father seeks out a shape shifting creature to embody the form of his deceased daughter, and then the father and mother seek to integrate this daughter-not-daughter back into their lives, even as they struggle with the question of who this new daughter really is. In "HEADWATER LLC," a woman who had befriended a kappa as a teenager comes to regret how she sold out the kappa to become slaves in a water bottling company run by the girls she had wanted to be friends with.

The stories all are prefaced by a short, one-page document that previews the story in a particular form. The preview for "The Return to Monsterland," for example, takes the form of a transcript of what seems to be a news report of Godzilla's attack on a train in Tokyo. The preview for "Placentophagy" takes the form of a Bloody Mary recipe using placenta strips. The preview for "Rokurokubi," a story about a human/demon who can stretch his neck incredible distances, is an advertisement for a support group for "humans w/demonic afflictions."
Collapse