Deceit and Other Possibilities (Willow Books, 2016) is Vanessa Hua's debut collection of short stories, and the ten stories cover a range of characters with different experiences in and through the transnational links of Asian America. 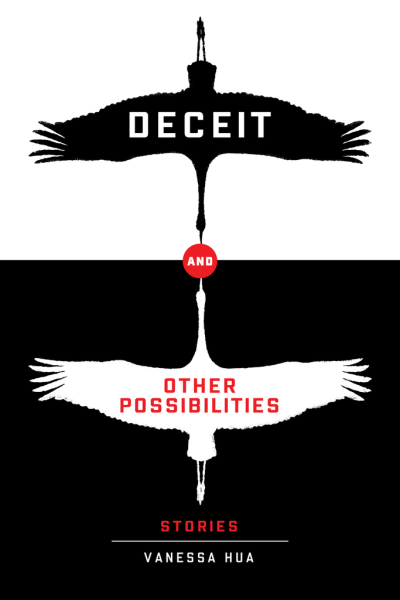 It's fitting that I finally sat down to write this review yesterday on an airplane bound for San Francisco because this collection felt very Californian to me in its selection of multiethnic characters and particularly the interplay of the individuals in their communities. The ethnoscape, to borrow Arjun Appadurai's term, is distinctively West Coast, especially for immigrant and middle class/professional Asian Americans and the second generation. The stories offer a sense of the perspectives, feelings, and experiences of Californians in the late twentieth and early twenty-first century.

The opening story, "Line, Please," drops us into a first-person narrative featuring Kingsway Lee, a Hong Kong pop star who is heading back to California where he grew up, on the tail of a sex photo scandal in which cell phone pictures of his many affairs with starlets and the leisure rich threaten his image and destroy his relationship with his girlfriend Viann. Kingsway is an unrepentant rake, fond of himself and his celebrity status in a way that belies his inability to grasp what his actions truly mean. The first line of the story, "Perhaps you've heard of me?" is both a brag and a flirtation, making you the reader complicit in his story that masquerades as a lament of his misfortune.

While staying with his parents, lying low as the sex scandal blows over, he sees himself still as irresistible to women such as Jenny Lin, someone he grew up with and runs into on his visit, and even a woman who works at a foot massage clinic he visits. The story as a whole sketches out the world of Hong Kong celebrity scandal, pulling out a strand that seems to me specific to the age of greater movement across the Pacific, where American-born Chinese sometimes make their way to Hong Kong to find a celebrity life unavailable to them in the United States. (Of note, too, is the suggestion that Kingsway's family is not from Hong Kong but instead Taiwan, highlighting some of the complicated crossings of geography, region, and dialect that undermine any singular understanding of Chinese identity.)

The second story, "Loaves and Fishes," takes a tangential storyline to the first. Pastor Alex Chan is on a flight to Hong Kong from San Francisco where he recognizes Kingsway, ostensibly on his return after the events of the first story. Pastor Alex is an evangelical Christian of the megachurch variety, and though he has faced some difficulties recently in his work, he sees this chance encounter with a fallen Kingsway as his opportunity to redeem himself and bring glory to God and his church if he can bring Kingsway into his fold. To accomplish this goal, he ends of sabotaging the flight in a show of quite twisted logic and a lack of concern for the consequences of his actions.

Likewise, the final story in the collection, "The Deal," features another evangelical, Pastor David Noh, who leads a group on a mission to Africa to spread the gospel and save the heathen people of a remote village. The trip signals a moment of desperation for this Korean American pastor as he struggles to keep his ministry, Bountiful Abundance, afloat: "Bountiful Abundance had taken root among Korean American lawyers, software engineers, college students and activists, the children of immigrants: strivers, all. The church had a different style of worship, not so serious, not so Korean." The story sketches out the moral and religious world of Pastor David, a former high school wrestling coach and teacher, whose salvation and ultimate calling to do the work of God has led him to a mission that seems beset with failings at every turn. Although I am not familiar with the world of Asian American evangelical Christianity, I know that it is a vibrant community that explores the intersections of faith, race, and often immigrant generations quite pointedly. These two stories engage with the worldview of Asian American evangelicism, albeit from a perspective that questions more than affirms in mere platitudes.

Of the stories collected in this book, the one that stands out the most is "What We Have Is What We Need" because it focuses on Mexican immigrants. This story, however, centers on similar tensions of family cohesion and a sense of impotent agency that pervade the other stories and dilemmas experienced by those other characters. The first-perosn narrator Lalo is a boy living with his parents in San Francisco while his other siblings remain in Mexico with their abuelita. On the one hand, there is the situation of the divided family across the border. And on the other hand, even within the ostensibly whole nuclear family unit subset in San Francisco (father, mother, and son), there is developing tension between the more working class masculinity of the father who is a locksmith and the aspirational, professionalizing mother who takes English language classes at a Latino social service agency and then joins the staff as a community liaison. Lalo's story reveals some of the ruptures that appear in the pursuit of the American Dream.

The other stories provide interesting glimpses into the experiences of characters with various backgrounds. In "For What They Shared," a Chinese immigrant and an American born Chinese woman face each other at a distance across a divide manifested in the difference between the immigrant woman's family camping trip with her husband and in-laws and the Chinese American's outing with rowdy white American friends. In "The Responsbility of Deceit," a closeted gay Chinese American man vacations at a small bed and breakfast in Napa Valley with his boyfriend and runs into his parents' good friends. In "Accepted," Elaine Park is denied admission to Stanford but cannot face telling her parents and so embarks on a large-scale deception in which she crashes in the dorm room of a couple of other first-year students, audits classes, and even joins ROTC as if she were enrolled. This story draws out to absurd lengths the effects of the intense pressure faced by many Asian American youth to gain admission to elite colleges. In "The Shot," a mixed-race man named Sam faces relationship difficulties that become entangled in a confrontation he has with other men on a public golf course. In "The Older the Ginger," a Chinese American man in old age makes a long overdue visit to his mother in his home village in China, only to encounter deceit and avarice at the hands of the villagers who all desire his connections to America. And in "Harte Lake," a widowed Japanese American woman goes solo camping as penance and to memorialize her hsuband's death, with unforseen difficulties and resulting ruminations on what her marriage has meant.

Overall, the stories weave a powerful web of insight into the lives of these Californians, and I think the collection would be an interesting one to read or teach alongside other California-based works. The stories do a wonderful job of teasing out the personal dilemmas faced by the characters while referencing and situating these individuals in the social context of Asian America.

Note: I went to the same high school as Vanessa Hua!
Collapse