I was excited to get the second volume of Secret Coders by Gene Luen Yang and Mike Holmes, titled Paths & Portals (First Second, 2016). This graphic novel series follows a young girl, Hopper, as she learns about computer programming with her friends Eni and Josh. They are secret coders because they learn not in a class but from the janitor of their private school, who turns out to have a secret past as a teacher. 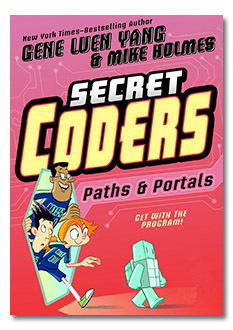 The story has Yang's characteristic qualities of humor, insightful observations of social dynamics in school and family, and careful attention to both the incidental and critical aspects of race amongst friends and acquaintances. As Hopper and her friends learn about programming by writing LOGO programs for robot turtles that Mr. Bee, the janitor, has made, she also deals with her mother, who is the Mandarin Chinese teacher at her school; Principal Dean, who is up to something; and the bullying male rugby players at the school, who are the principal's henchmen.

I love the adventure of this series, and as Yang has written about, there is also an explicit attention to teaching readers about computer programming in a fun way. As Hopper, Eni, and Josh are confronted with puzzles such as how to program one of the turtle robots to walk along a pattern on the floor, they think through their process and then explain their solution. The narrative also pauses to ask readers to think about how they would solve the programming puzzles before proceeding with a solution.

stephenhongsohn's review of the first volume in an earlier post here at asianamlitfans.
Collapse