Arun Gandhi and Bethany Hegedus's Be the Change: A Grandfather Gandhi Story (Atheneum Books for Young Readers, 2016), with illustrations by Evan Turk, is an autobiographical story of Arun Gandhi's experiences with his grandfather, Mahatma Gandhi, in an ashram (or service village). The illustrations are beautiful, richly textured through bright colors and materials. 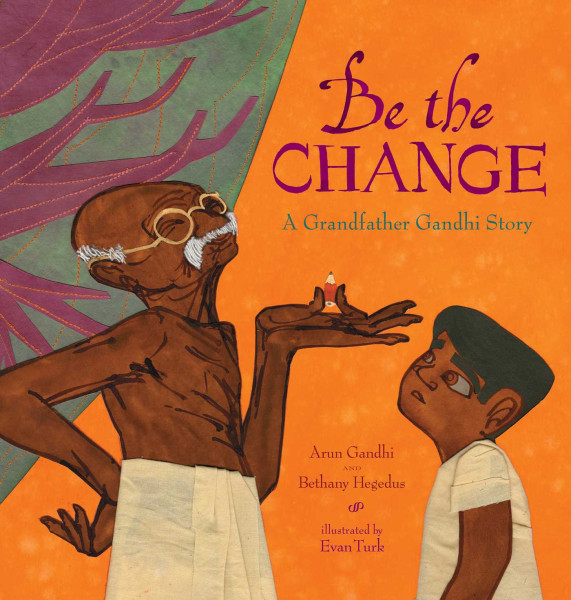 Hegedus explains in a note at the end of the book that she heard Arun Gandhi speak in the months after the attacks of September 11, 2001 on the World Trade Center and knew that she wanted to work with him to tell his stories of his grandfather to bring hope back into the world. Be the Change is the second book in this series so far, and in it, Arun recounts how his grandfather's sense of nonviolence extended to being vigilant against waste or extravagance. As a youth, he did not understand how an act such as keeping a pencil worn down to its last few centimeters could be an important action in reducing violence in the world. But his father persisted in explaining, and over time, Arun understood how his every act has consequences that may be distant but nevertheless important in spreading peace and abundance for everyone.

Although this book takes the form a picture book, its story seems more appropriate for a slightly older child (the publisher notes K-3 as appropriate grade levels for readers), and the moral of the story is both simple (be the change) and layered (suggesting large scale things like the industries involved in making a pencil).
Collapse