Shobha Rao's An Unrestored Woman (Flatiron Books, 2016) is a collection of short stories exploring how the Partition of India has impacted individuals and their relationships from 1947 through the following generations. The stories are somewhat linked, with a character in one story popping up in another, usually as a minor character. I like this form for a collection because it suggests interconnections between people and lives, even if they may not know anything about each other's pasts and experiences. (Other short story collections reviewed here have used this form as well.) 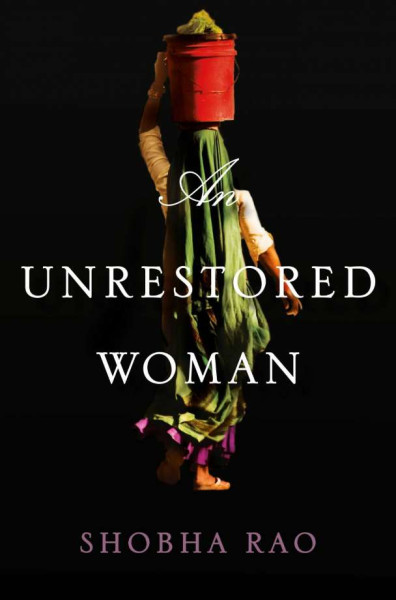 There is not a lot of hope in this collection--the stories illustrate a lot of cruelty in humanity and a sense of powerlessness in the face of both world-historical events and the unsavory actions of individuals. However, hidden in each of the stories is a solid sense of how people persevere. They may not thrive or achieve (happiness, greatness, etc.), but they continue on, sometimes even to escape a difficult situation for another, less horrible one.

The title of the collection (and of its lead story) comes from the 1949 Abducted Persons (Recovery and Restoration) Act in India, as the author points out in a prefatory note. This act sought to find the thousands of women in India and Pakistan who were abducted and violated after Partition. As Rao notes, however, "Though the commonly used term for these women is recovered women, I have chosen to refer to them as restored. The distinction may seem trivial, but it is necessary, for I believe that while the recovery of a person is possible, the restoration of a human being to her original state is not." As this perspective suggests, the loss experienced by these women and indeed the entire subcontinent due to the violence of Partition is something that cannot be fully redressed. Instead, what seems to be available to the individuals, their families, and the generations of South Asians that follow is act of chronicling, of narrating, and of illuminating the violence and the losses.

Some of the stories are set during Partition, featuring characters who are making a journey between India and Pakistan. At least a couple of the stories center on the violence inflicted by mobs on travelers on trains. The title story begins with Neela hearing that her husband has been lost in one of these attacks. And in "Kavitha and Mustafa," a married woman flees a train car being robbed with a young boy she initially assumed was also Hindu but then learned was an orphaned Muslim boy on his way across the border to Pakistan.

Each of these stories set in the mid-twentieth century has a linked story featuring characters decades later, often in a diasporic setting (the United States or England), when the individuals who experienced some form of violence during the Partition have survived and lived to join their children who have settled abroad. However, the stories do not trace a triumphalist trajectory for these families, suggesting that the younger generations have found peace and happiness outside of a violent homeland. Instead, these characters encounter their own violence at the hands of other people, such as enduring sexual assault in childhood ("Unleashed," "Blindfold," and "The Opposite of Sex").

The stories address some interesting aspects of Partition and its effects on people. For instance, the narrator of "The Lost Ribbon" is an old woman speaking of what she did when she had been kidnapped and kept captive as a sex slave in Pakistan. At one point, a soldier from the Indian Army approaches the house where she is kept and tells her that they can save her and send her to India, but as part of the treaties between the two countries, her child must stay behind. In "The Opposite of Sex," the protagonist is a cartographer who helps demarcate the line between Indian and East Pakistan, and driven by his desires for a woman he glimpses in one village, he redraws the boundaries in an attempt to derail her upcoming nuptials to someone else and to win her for himself. However, the slight alterations he made lead to disastrous consequences in the village, inciting violence in a heretofore peaceable population.

One thing that stuck out to me in the collection was how homosexuality plays out in unsavory ways as much as heterosexual desire is also always destructive and unsavory. There is perhaps only one glimpse of redemptive love in the character of Renu, who first apepars in the camp for refugees and unrestored women where she befriends Neela and shows her the intimacy of sharing a bed in contrast to the coldness of how Neela's husband uses her body and ignores her need for love. Renu's story is illustrated more fully in the story that follows, in "The Merchant's Mistress," where her unbridled sexuality allows her some moments of peace and happiness in being the mistress to both the merchant's wife and the merchant himself.

However, when it comes to love between men, there is a strong undercurrent of suffering and underhandedness. In "The Imperial Police," the protagonist Jenkins is a white British imperial police officer who pines after Abheet Singh, an officer under his command. Singh's death at the hands of rioters is perhaps a function not just of the ethnic-religious unrest of Partition but also the wayward desires of Jenkins. In "The Memsahib," the protagonist Arun pines after a white woman Lavinia who is the daughter of the family he and his mother serve in their large estate. She, of course, has no eyes for him and instead becomes engaged to another British colonialist. Arun discovers that her husband-to-be is actually in an amorous relationship with Lavinia's brother, but when he tries to save her by telling her this most shocking secret, she scoffs and reveals that she knows all about their dalliances but is only interested in the man's money and what it means for her future. This darkness sets Arun on a decidedly ugly path of revenge.

The writing in this collection is truly stunning, and that the language turns over and over through some truly awful situations and behaviors (people are not good in this book!) is what makes it so powerful if difficult to read.

stephenhongsohn's review of this collection.
Collapse