I found Allen Gee's My Chinese-America: Essays (Santa Fe Writers Project, 2015) at my public library while browsing the shelves. The book is a collection of eleven personal essays in which Gee thinks through Chinese American identity and heterosexual masculinity in the context of a range of experiences, historical events, and literary texts. 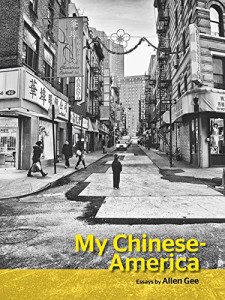 Many of the essays seem to center on mainstream white Americans' perceptions of Asians--those bugbears of perpetual foreignness and emasculation--and Gee counters these stereotypes with assertions of his humanity and strength. For example, Gee narrates his resilience and virility with respect to white authority figures (state trooper in "Profile"), desirable white women ("Osaka"), and white/black/brown boys and men who are various kinds of competitors ("Fraught with Masculinity," "Point Guard," and "By 2042"). And in "Asians in the Library," he offers a reading of the infamous YouTube video in which a white female student at UCLA ranted about Asians in the library, juxtaposing her mobilization of tried-and-true stereotypes and fears of invading Asians with Jimmy Wong's musical parody response to the video.

The most memorable essays for me were the ones in which Gee explored his family's stories ("Is It Safe There?" and "Silences") and his own idiosyncratic place in America ("The Real New South"). In "Is It Safe There?," Gee takes as a starting point an anecdote of how his white friends at a conference location asked him to find them a dim sum place for dinner and then proceeded to ask him if Chicago's Chinatown was a safe place for them to visit. The essay then focuses on his experience of New York City's Chinatown in Manhattan, and he describes it as a racial safe haven for him as a young Chinese American boy whose father had relocated the family to upstate New York. Gee considers the changes that Chinatown has undergone over his lifetime--not for the better--and how disrespectful it is for white Americans to visit Chinatowns as tourists who gawk at the everyday lives of Chinese who often are limited in their ability to find work elsewhere. In "Silences," Gee delves further into his family's past and reveals layers of secrets about his parents and grandparents, ultimately demonstrating the resilience of Chinese Americans over the course of the twentieth century in building and sustaining family life in a hostile, racist society.

Because I lived in North Carolina for six years while in graduate school in English, I have long had an interest in thinking of Asian American experiences in the American South, so Gee's explorations of his decades of life in Houston and then Milledgeville, Georgia, are particularly interesting to me. Many of the essays make at least some passing reference to the southern context of his racialized experience, but it is in "The Real New South" that Gee most directly addresses how his presence as an Asian American in certain regional spaces might constitute a "new south," a term that he explains has been around and resurrected in different contexts since the post-Civil War, Reconstruction Era. Gee describes himself as a racial pioneer--someone who is distanced from his home community and communities of other Chinese Americans in other parts of the country. His work is to normalize the presence of Chinese Americans in the South, to be the first Asian person many Southerns meet.

Two other essays stood out for me for different reasons. In "Point Guard," Gee employs an experimental narrative layout. The essay is really two essays, laid out in two columns that run concurrently down each page. The left column is a personal narrative of Gee's life with basketball. The right column chronicles the rise of Jeremy Lin and Linsanity, focusing on Lin's fame and fandom among Asian Americans. In "Echocardiography," Gee offers perhaps his most vulnerable essay, one in which he focuses less on a heroic narrative of his self but rather on a startling moment of weakness when he discovers that he has atrial fibrillation. Through his experience at the hospital, he realizes his mortality.

The final essay in the collection, "My Chinese-America: A Meditation On Mobility," takes a tour through the fifty states. Structured alphabetically by state name, each section is a brief paragraph detailing either a personal experience of Gee's or some significant Chinese (or Asian) American historical figure in that state. Some of the experiences chronicled in earlier essays reappear briefly in this essay, as in the summary in the section on Kansas of the opening essay's narrative of racial profiling by a state trooper ("Profile"). Other brief paragraphs provide new stories and commentary on the racial landscape of the United States while treading familiar thematic territory such as mentions of fishing (Gee is an ardent leisure sports fisherman), sexual encounters, and emasculating stereotypes of Asian men.
Collapse