Adriane Tomine's Killing and Dying (Drawn and Quarterly, 2015) is a collection of six illustrated stories about different individuals' relationships with various intimates and family members. 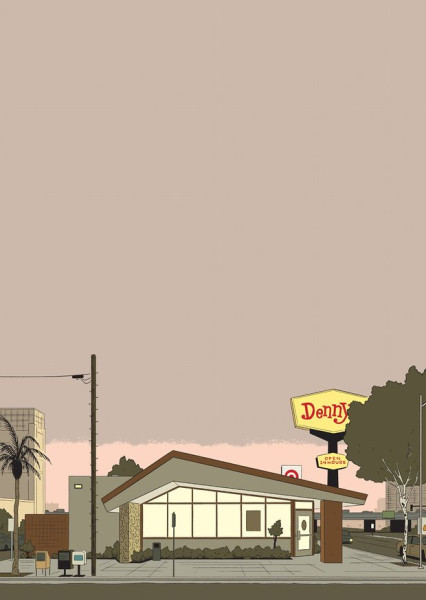 As in his previous work, Tomine provides glimpses into interpersonal dynamics that are often unsavory. His characters are seldom heroic but rather petty or otherwise mired in their own sense of martyrdom. The simple, clean drawing style in either monochromatic shading or muted coloring complements the focus on the mundane situations of the stories while contrasting with the sometimes difficult emotional reactions that the characters have.

In "A Brief History of the Art Form Known as 'Hortisculpture,'" a man working as a gardener has aspirations to creating a new art form combining ceramic sculpture and living plant life. His attempts to find buyers and to place his art in a nursery fail, and his frustrations come out with his wife and child. Interestingly, this story ends on a somewhat positive note as he comes to a resolution about his aspirations.

In "Amber Sweet," a young woman is repeatedly addressed in lewd ways when she is out and about, and she discovers that she looks like a famous porn star named Amber Sweet. This resemblance shadows her into her early adulthood and relationships, with some surprising chance encounters, and we eventually discover that she is narrating the story to someone (a significant other?) sometime in the future. Here, the visual narrative offers a lot of interesting information not provided in the voice over narrative or dialogue, such as with the woman's hair length that helps to signal different moments of her life (and how she perceives her resemblance to Amber Sweet).

In "Go Owls," a man and woman meet at a recovery support group and seem to embark on a relationship that seems quite open, honest, and accepting even as it is still troubled and full of cringe-worthy interactions. The man is a small-time drug dealer, but the story eventually reveals that this criminality is just one small part of his shadiness.

Of all of the stories, "Translated, from the Japanese," deals the most directly with Asian/American experiences. There are brief nods to Asian American characters in some of the other stories, but this takes as a narrator a (Japanese?) woman on a return flight to California with her child. The narration is addressed to this child, and the woman describes that flight and how the stewardess mistook the professor sitting next to them as her husband. Upon arrival in California, her husband is there to greet them and to take them to their new apartment where it appears they will live without him. The visuals seem to be largely from the woman's-eye-perspective, so we never really see the characters themselves. This story requires the most reading between the lines, for sure, which is in part what might be suggested by the title's allusion to translation.

The title story, "Killing and Dying," concerns a teenage girl's interest in standup comedy, encouraged by her mother but less so by her father. What is most compelling in the narrative is what happens to the mother--she apparently undergoes chemotherapy and then passes away--all without any explicit commentary in the dialogue. This story shows the mastery of Tomine's storytelling in the graphic narrative medium, where the emotional core of the story is something that appears obliquely in the panels, underlying the (sometimes strange) actions of the characters.

In the final story, "Intruders," a man starts visiting an old apartment of his, slipping in with his old key while the current occupant is out. The story is elliptical, as many of Tomine's stories are, and it's not wholly clear what drives this man to this need to spend a few hours in his old apartment as if he were still living there. We get hints here and there of difficulties in his life that have led to this point when he feels a need to go back.

All in all, these stories are excellent additions to Tomine's body of work. He continues to turn an unflinching eye on everyday characters who struggle with lives that are not quite what they want them to be. He offers careful attention to telling these stories full of unspoken feelings and thoughts.

Reviews of Tomine's other books appeared in earlier posts:
Collapse