In Nothing Ever Dies: Vietnam and the Memory of War (Harvard University Press, 2016) Viet Thanh Nguyen considers the cultural work of war memories and develops an argument about the ethics of remembering and forgetting that focuses on recognizing the inhumanity in Self and Other. Nguyen explores a few cultural forms such as novels, films, visual art, video games, memoirs, and memorials as well as the infrastructures that support the production, consumption, and circulation of such forms (MFA programs, museums, etc.). Ultimately, the book is a form of cultural criticism that also weaves in and out of philosophical discussions of ethics, and Nguyen cites and discusses a range of political philosophers on concepts of memory and war. 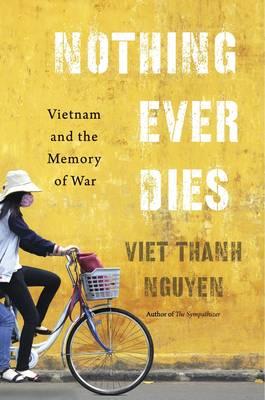 Nguyen is the author of a recent novel, The Sympathizer (Grove Press, 2015), which has won great critical acclaim as well as literary awards such as the Pulitzer Prize and the Asian/Pacific American Award for Literature. I first encountered Nguyen's work, however, in his earlier scholarly book, Race and Resistance: Literature and Politics in Asian America (Oxford University Press, 2002), which has always stood out to me as an interesting piece of criticism that combines textual and cultural analysis thoughtfully with considerations of the systems that support literary studies, in particular the attention to how Asian American studies as a critical ethnic studies field has tended to privilege or discount particular texts for their politics of resistance to white supremacy or lack thereof.

Nothing Ever Dies continues in the vein of Race and Resistance by paying attention not just to cultural forms and the ways they circulate in the world but also to the critical conversations that enable the production, consumption, and circulation of such forms in the first place. Similarly, Nothing Ever Dies also refuses the conversation about good or bad texts (ones that either support a critical/revolutionary perspective or not). One of the most powerful claims in Race and Resistance was that Asian Americanist scholars need to be attentive to their critical lens, developed through the habits and canons of the field, that end up blinding them to the complexity of literary texts they study as well as to the plentiful examples of Asian Americans outside the academy who think very differently about politics (such as with anti-communist Vietnamese American communities and politicians). In Nothing Ever Dies, Nguyen frames this perspective as the need to recognize the inhumanity of both the Self and the Other. Against most discussions of ethics in war that try to reclaim the humanity of the decried Other (the enemey), Nguyen argues that simply recognizing the victims as humans is an incomplete form of ethical engagement because there is no confrontation with one's own inhumanity (as the aggressor/winner/etc.) or the actual inhumanity of the Other. Putting undue emphasis on victimization is an issue that has come under much discussion, particularly in the idea of identity politics, and Nguyen's argument is not to fully embrace either those who argue for the importance of identitarian-based political struggles or those who say that identity politics are merely a distraction from the true class struggle (based in socioeconomic factors) but rather to suggest that such a framing is problematic in itself and that there needs to be a dissolution of the organizing logic of victim and abuser.

The first part of the book focuses on developing the ethical argument about remembering--whom do we remember and how. Nguyen touches on theories of trauma to discuss the importance of remembering the victims of war but then proceeds to push on how claiming victimhood because the free-floating approach available to everyone to center their perspectives at the expense of others. Furthermore, anti-war activists who advocate for seeing the enemy as victims might succeed in reclaiming the humanity of particular enemies, but the mechanism of claiming humanity does not in itself solve the problem of war since another inhuman enemy has easily and continually arisen as America's new antagonist in the past century. The central claim of Nguyen's ethics of memory is in what he thinks of as the inhumanities--the need to study and think and understand the inhumanity that underlies all wars, even on the part of ourselves and of the good guys.

The second part of the book focuses on industries that support memory work. Here, Nguyen's emphasis is on the fact that the way we remember the war is a constantly produced project--propaganda and soft power--and that there are differences in what kinds of cultural forms of memory circulate widely versus those that do not. He also emphasizes the asymmetrical power and circulation of memory between the United States and Vietnam, between the visual powerhouses of Hollywood and the less sophisticated cinema of Vietnam.

The final part of the book considers aesthetics more centrally, and the chapter "On Victims and Voices" stood out to me as the one that might end up garnering the most attention from other scholars in the field. In this chapter, Nguyen takes on the familiar issue of ethnic writers' assuming of a voice for their communities. Although he does not seem to settle on a very solid claim about what counts as a representative voice or not (perhaps that is his point), he does raise a number of issues about ethnic writing in the United States such as how the mainstream writing establishment (through MFA programs, editorial selection at major publishers, the book review industry, etc.) chooses what kinds of stories ethnic writers are allowed to publish and be lauded for. As a result, he states that those Vietnamese American writers who have become widely known in the past couple of decades are complicit in the telling of war stories about Vietnam that support a particularly American understanding of the war and the people.

Overall, I found Nothing Ever Dies to be a thoughtful consideration of the ethics of memory and the issues of ethnic writing in the United States. I'm curious to see how scholars in Asian American literature take up this book of criticism but also how the general public and the industry of book reviews takes it up. It extends the arguments of his earlier work in Race and Resistance and also takes as touchstones many critical issues in the academic field of Asian American literary studies, so I wonder how much traction it might have with people who are unfamiliar with the lay of the land.
Collapse