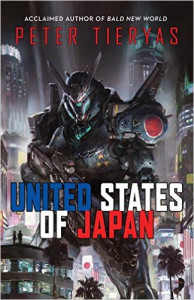 Peter Tieryas’ new science fiction novel, The United States of Japan (USJ), opens in a Japanese American prison camp in 1948, written from the perspective of internees who are by turns angry, scared, and conflicted. Then, the American soldiers disappear and the Imperial Japanese Army arrives to announce that the U.S. has surrendered in the face of attacks by mecha-like giant robots unleashed by Japan. Reactions of the newly-freed internees are mixed. I was hooked.

I’m a fan of Philip K. Dick, and as the back of the book notes, USJ takes its initial cue from the premise of The Man in the High Castle. But just as Dick’s 1963 classic reflected its own time period’s values and concerns (particularly in its fetishization of the I Ching), USJ is a text of the twenty-first century. Social forces, ideas, ideals, and texts are suffused throughout social networks, personal electronic devices (called “porticals” in the novel), and decentralized webs, and thus impossible to pin down. Yet, stubbornly, characters continue to search for meaning, connection, and justice..

The bulk of the narrative takes place in 1988 Los Angeles, in which Beniko “Ben” Ishimura, is a Captain in the Japanese Imperial Army, Office of the Censor, and Akiko Tsukino, an agent of the Tokko, or the Japanese imperial secret police. Although a talented programmer, Ben is something of a disappointment; he is the only person in his class from the Berkeley Military Academic for Games Studies who has not reached the level of colonel. As a child, Ben had turned in his parents to the authorities for speaking against the empire. But despite this early show of loyalty, he meanders through life in a state of ambivalence and borderline paranoia. Agent Akiko Tsukino, in contrast, is a true believer; in wielding the torture and bioweapons that are the tools of her trade, she finds grim righteousness as well as scorn for her weak victims.

When Ben is contacted by his former boss, General Kazuhiro Mutsuraga, about the death of the general’s daughter Claire, Akiko is sent to question him. There is an unauthorized video game circulating called the United States of America, which not only imagines that the U.S. won in 1948 but also trains people to fight to overthrow the Empire in the present. This game is tied to the George Washingtons, or GW’s, an underground resistance movement, and the now missing General Mutsuraga is suspected of having created this game. Ben, due to his proximity to the General and his facility with games, is by association also suspect. But in pursuing Mutsuraga, the GWs, and the video game, neither Ben nor Akiko – nor the reader – find what is expected.

Amid complex layers of political and personal dynamics, these initial narratives unravel to explore what it means to be mixed race, to be a cyborg, to be loyal, to be a patriot, to be a resistance fighter, to be a gamer, to a be a human being. The novel is great fun – intellectually, ethically, and aesthetically – and I’ll be pondering its implications for a while.

As other reviews have noted, the novel pays homage to Japanese pop culture as well as classic science fiction. But what resonates most with me are the political-ethical-philosophical questions raised by an early, unresolved conversation debate early in the novel:

“Think about the way the Americans treated us. Even when we weren’t in camps, they’d always call us nips or chinks, vandalize our stores, and harass us. They think we all look the same – Chinese, Japanese, Vietnamese, Korean.”
“But America stood for something, a dream that goes beyond race or background,” Ezekiel said.
“Something even they didn’t believe when it came time for action.”
“It’s what they were striving for.” (USJ, 28)

As much and more than ever, this captures the central conundrum we face in the U.S. Peter Tieryas, author of the award-winning Bald New World and Watering Heaven, has given us an Asian American sci-fi classic that draws on the best traditions of speculative fiction to meditate seriously on what any of us can/should think and do in a world of repression, surveillance, disillusionment, and uncertainty.