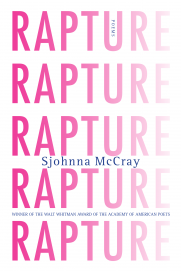 For example, the poem "How to Move" begins:

I cannot look at anything
so black as my father's leg
or used-to-be-leg below the knee,

now a stump. If a child's doll lost
its flexible hand, the surface
underneath would be as round

as father's stump. I've touched it once.

We're thrown into a consideration of the speaker's father's leg and his amputation, where the presence of this injury is foregrounded in the context of childhood. His father's blackness, the darkness of his skin, makes him stand out in contrast not just to the people around him (either darker or lighter in skin tone) but also with respect to his first prosthetic leg, made in "the color of oatmeal" that is perhaps meant to approximate normative whiteness.

Rapture is the winner of the Walt Whitman Award for a debut poetry collection, chosen by poet Tracy K. Smith. The sequencing of the poems in this book reminded me of Ocean Vuong's Night Sky With Exit Wounds in that both collections start with poems about the speaker's father and mother and end with poems about same-sex attraction and relationships. Like Vuong, McCray's life is framed in many ways by the Vietnam War although in his case, his black American father was stationed in South Korea during the war where he met a Korean woman.

The earlier poems imagine how the father and mother meet in the context of a military presence that condones or even celebrates prostitution of local women. Many of the poems then move into considering the experiences of this mixed-race couple in middle America as well as the speaker's experiences as nonwhite.

Some of the poems capture a sense of the danger and the excitement of sexual awakening and experience. In "Death Is a One-Night Stand," the young speaker follows a "poor boy" out of the city in the dark hillside to view the stars, and he describes the moment of finding himself alone in the night with this stranger as one interrupted by visions of a police search party looking for his body. This fear is balanced only partially with the anticipation of intimacy, which itself is framed around the thought of death: "He places a hand on the dip of my back / to guide me, like Hades, into his world."

The later poems interestingly consider a more settled experience of sexuality and intimacy. Rather than exploring those first encounters and the first blush of excitement, these poems are about a couple's developed and developing intimacy, the way little things help make up both the everyday quality of being in a relationship and also add up to something much larger. This idea is addressed most diretly in "The Green Bowls," where the speaker's lover brings over the titular green bowls as well as spoons and plates to his place, signalling the process of moving in together and beginning to combine belongings into shared trappings of a life together. The bowls, spoons, and plates are symbols of domesticity but also of what underlies it:

I knew I was in love but would have to
cook. We stood over the kitchen counter
as if taken by surprise. Centered in sheets
of newsprint lay not ordinary plates,
but a new shape entering our lives.

I definitely look forward to more poems from McCray and am especially interested in seeing how he shapes language around same-sex intimacies beyond the more tried-and-true language of first encounters, discovery, and the heat of desire.
Collapse