It's been awhile since I've read a book on politics geared towards a general audience (rather than an academic one), and Deepa Iyer's We Too Sing America: South Asian, Arab, Muslim, and Sikh Immigrants Shape Our Multiracial Future (New Press, 2015) was a great way to return to the genre. 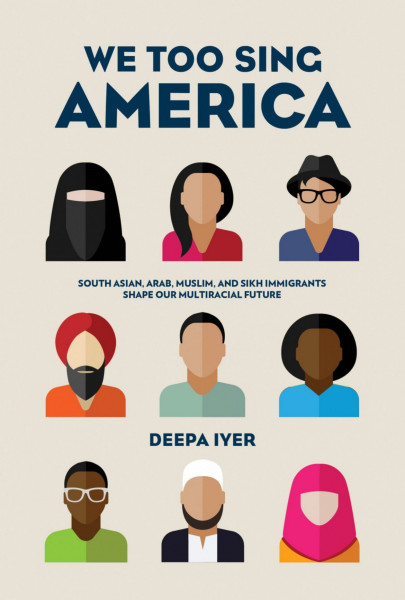 Deepa Iyer writes from the perspective of a lawyer and activist for racial and immigrant justice, and this book offers arguments for coalitional social movements that connect efforts to combat anti-immigrant, anti-Black, and anti-Muslim laws, policies, and actions. Iyer makes a few central claims about what social justice looks like and how it can progress. Among these is an emphasis on understanding post-9/11 anti-Muslim hysteria as a wide-reaching phenomenon that impacts different people based on perceived racial identities of Muslims. Iyer also reaches back to the historical contexts of anti-Asian sentiments, highlighting exclusion, internment, civil rights movement, and immigration law shifts in 1965 as significant shaping factors in the contemporary landscape of legal and extralegal discrimination. In addition to her attention on laws and policies that have disparate impacts on different populations, she also argues strongly for addressing media and political discourses about these issues. For her, the framing of discussions is often crucial to our ability to understand what is truly at stake.

The eight chapters develop from a close consideration of the Oak Creek Massacre against a gurdwara in Wisconsin in 2012 through chapters that consider racial profiling in immigration law and policing; coordinated efforts by right-wing extremists to attack mosques and push through bans on Sharia law in the south; challenges to the model minority myth and cultural exceptionalism that frame Asians as honorary Whites; youth activists who are undocumented migrants advocating for changes to immigration law and deportations; and interracial coalitions fighting police violence.

Iyer weaves her considerable knowledge of the legal and policy world with the voices of people impacted by some of the most troubling moments in post-9/11 America, including young Sikhs whose families were torn apart in the Oak Creek Massacre and undocumented, queer South Asian American youth whose activism has helped open up possibilities for undocumented youth to stay in the country, pursue higher education, and keep their jobs.

Underlying Iyer's overall argument is the idea that America is a land that often rejects non-White others but that nevertheless has the capacity (perhaps even the duty) to change its laws, practices, and personal biases to embrace other Americans. This is where the title, We Too Sing America, riffs on Langston Hughes's famous poem in which the speaker sings America despite being treated poorly.

One thing that is interesting about the book is how Iyer imagines it as part of ongoing and future conversations on race. In the final pages, she calls for all readers to commit to "race talks" in their lives, with neighbors, coworkers (possibly affinity groups in their organization), and others in their communities and across communities. The goal of these talks is to connect people at an individual level so that they learn how much they share with others but also learn to love and respect those who come from vastly different experiences. Her website offers some more guidance on hosting and participating in these race talks.
Collapse