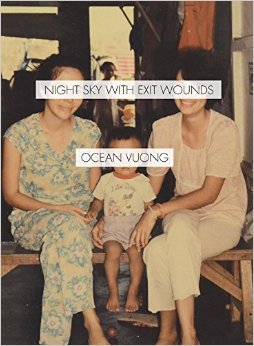 The book is divided into three unnamed sections. The first roughly focuses on the poet-narrator's father and mother and their experiences fleeing Vietnam to America as well as the continuing repercussions of violence and loss that follow such pain. The second part picks up on queer sexuality, particularly in male–male sexual encounters. The final part sees a melding of the major themes of the first two parts.

The most significant relationship explored in these poems is the father–son relationship, where the father is an intensely important figure in the son's life but someone whose violence haunts the intimate world of the family. Especially in the first part of the book, the poetic voice reminded me of other writing by Asian American refugees who, in their memoirs and poetry, imagine the experiences of their parents and other relatives who experienced the trauma of fleeing a war-torn homeland. There is an interesting move to inhabit these experiences as one's own as well as to detail how such experiences unfurl into the lives of the next generation.

The opening lines to "Always & Forever" is a prime example of the fraught yoking together of kindness and violence, propriety and impropriety:

Open this when you need me most,
he said, as he slide the shoe box, wrapped

in duct tape, beneath my bed. His thumb,
still damp from the shudder between mother's

things, kept circling the mole above my brow.
The devil's eye blazed between his teeth

And later in the same poem: "Or maybe just a man kneeling / at the boy's bed, his grey overalls reeking of gasoline // & cigarettes."

The poem that caught my attention the most is in the third part of the book. Entitled "Notebook Fragments," it appears to be a selection of observations, somewhat random, but the juxtaposition of observations and sequencing of them is, of course, what makes the poem especially interesting. One passage:

An American soldier fucked a Vietnamese farmgirl. Thus my mother exists.
Thus I exist. Thus no bombs = no family = no me.

I met a man tonight. A high school English teacher
from the next town. A small town. Maybe

I shouldn't have, but he had the hands
of someone I used to know. Someone I was used to.

As with the book as a whole, this passage shifts back and forth between the speaker's first-person experiences and the experiences of his grandparents and parents. And weaving those experiences together are the world-historical forces of American intervention in Vietnam.