I apparently have a soft spot for works of literature with the word menagerie in the title; the play The Glass Menagerie by Tennessee Williams has been one of my favorites since I first read it in high school. Add to that play my love for Ken Liu's short story, "The Paper Menagerie," which you can read in full for free at i09. I happily read through Liu's collection of short stories just published, The Paper Menagerie and Other Stories (Saga Press, 2016), and enjoyed the range of fantasy and science fiction stories that demonstrate Liu's unique yoking of those genres with historically and racially astute narratives. 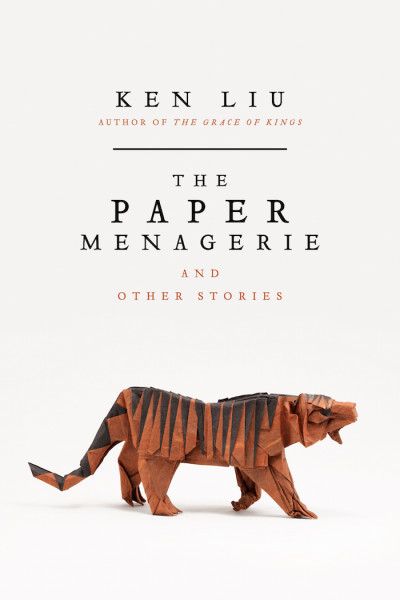 Read the story but prepare to weep! It is an astoundingly moving short story that exemplifies Liu's imagination and ability to yoke together the fabulist mentality of fantasy/science fiction genres with a deeply emotional awareness of the lived experiences of racialization in the United States. There's something extraordinary about the fragility embodied in the paper tiger, the zhezhi created by the protagonist's mother as expressions of her love and her past. As my friend

stephenhongsohn pointed out regarding this story, racial melancholia is the worst! The story truly captures the loss attendant upon immigrant families that is passed intergenerationally through both the disconnection from a home country and the experiences of racist antagonism in the new homeland. I love the magic of the paper tiger and other creatures, a set of toys that comes alive with the mother's breath. Yet, these are toys not understood nor appreciated by the white American boys in the protagonist's neighborhood, and as such, they became markers of the shame that he feels at being different and not-quite-American--things to be rejected and hidden along with Chinese language in favor of things like factory-made Star Wars toys and English language.

The other stories in this collection are similarly thought-provoking and often heartbreaking as well. Some of the stories are thought experiments, taking up a scientific concept and spinning it into fictions of worlds beyond our current experiences. The opening story, "The Bookmaking Habits of Select Species," for instance, considers what it means to record experiences in written form and takes as a form some brief descriptions of how various species "write" and archive experiences. As a result, the story questions what it means to have intelligence and to separate thought from physicality.

The stories I liked the most take on a fantastical or science fictional mode while weaving in Asian/American experiences. I also especially appreciated Liu's attention to the historical and linguistic specificity of Taiwanese experiences, with a complicated grappling with Japanese colonialism, Chinese politics, and a yearning to understand the silences in familial stories. In this respect, "The Literomancer" is especially moving. It centers on a white American girl who moves with her parents to Taiwan during the Cold War. The father works for the US government in some capacity as someone intent on ferreting out Communist spies with the Taiwanese Nationalist government. The girl befriends a boy her age and his grandfather. The grandfather practices literomancy, the magic of prophesying through words, particularly in reading the chacters of Chinese words for deeper meaning. The story is tragic, much like "The Paper Menagerie" is, with childhood innocence destroyed upon the reefs of grown up political hostilities, and the girl becomes part of a betrayal that she cannot possibly understand.

Amont the other stories that I really loved, "A Brief History of the Trans-Pacific Tunnel" and "The Man Who Ended History: A Documentary" stood out for their grappling with our sense of historical truth, understanding, and forgiveness. "A Brief History" is an alternate history story in which, instead of entering a second world war, Japan and the United States embark on a trans-Pacific, undersea tunnel to connect Asia and North America. The resulting decade of work stimulates the Depression era economy and diverts inter-country aggression towards this shifting configuration of global trade. Of course, this alternate history echoes the work of Chinese railroad workers who helped build the transcontinental railroad on North American soil in the 1800s.

"The Man Who Ended History," similarly, engages with the difficulties of mid-20th century world politics but from a science fictional perspective in which a husband-wife team of historian-experimental physicist discover a way for individuals to experience historical moments but in the process always destroy those moments from further experience. The Chinese American husband, an historian, becomes obsessed with redressing the atrocities of Unit 731, a secret laboratory/horror chamber during World War II in which the Japanese Imperial Army experimented on Chinese and other prisoners and civilians to test the limits of physical pain and endurance as well as to explore possible biological weaponry. The Japanese American wife, the experimental physicist, provides the means for him to send relatives of victims of Unit 731 to the past to experience what really happened. The story takes the form of a documentary film and offers varying perspectives on what it means to remember a historical event, to apologize for atrocities of the past, to be accountable as governments that did or did not exist in the same way at different moments in time, and ultimately to remember while moving forward in time.

These stories are all remarkable, beautifully written and provocative in their subject matter.
Collapse