Jhumpa Lahiri's In Other Words (Knopf, 2016; translated from the Italian by Ann Goldstein) is a fascinating, brief series of essays about the author's embrace of Italian as a language for reading and writing after her decades of master storytelling in English. The translation in English appears in the first half of the book with the original Italian in the second half. 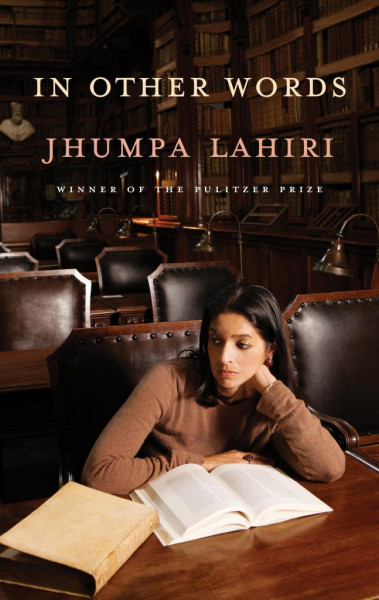 A review in The New York Times tends to point out the clunkiness of the prose and Lahiri's own acknowledgement that this writing is nothing like her English-language prose, but for me, what is utterly beautiful about this book is Lahiri's self-conscious exploration of language as a medium for thinking and living, especially when she deliberately displaces herself into a foreign language that is neither her parents' native language (Bengali) spoken at home nor the language of a country in which she grew up (English). She chooses Italian in part because of her background studying Italian language and literature but also because of her experiences visiting Italy a few times in early adulthood. These visits crystallized for her the power of language and identity and shook loose the experiences many Asian Americans have in the United States when their appearance leads others to expect certain kinds of words and accents to come from their mouths.

I love Lahiri's determination to read and write only in Italian while she lives for a few years in Italy with her family. This decision alienates her from the language that is most comfortable for her but also demands that she stretch her thinking and her ability to articulate her ideas in words.

There are two pieces in the collection that are more like (fictional) short stories than essays, and they operate in a sort of dream-like tone. I don't know if it is the influence of Italian literature or something else that leads her to write stories that are functionally quite distinct from her realist, spare prose in English. She herself comments that there is also something interesting about the autobiographical impulse when she writes in English versus in Italian. As an Asian American writer, she is read by most people as imbuing her fiction with autobiographical facts or perspectives, even as she insists that her fiction is created characters and worlds; but in Italian, she turns staunchly towards the autobiographical I, stripping away even the veneer of fiction in most of the essays to embrace the memoir form.

Lahiri's book is about an American writing in Italian and about an Asian American embracing a foreign language that is not what is expected of her as a mother tongue. There is a lot about translation between languages in the book, especially about the impossibility of full translations that capture nuances of a language's literary history. What is fascinating to me is that at the end of the day, we will probably still read this book as one by an American writer, even though it had to be translated from the original Italian. What does that mean for our conception of national language and of translation?

SInce I left academia, I've been thinking a bit more about reading outside of American literature (the field I immersed myself in as a scholar and teacher), and it's been quite interesting to consider how writers in other countries reflect on the movement of languages and literature in the world (what makes a bestseller in various countries? what gets translated from one language to the next?). I recently read Minae Mizumura's fascinating book of essays, The Fall of Language in the Age of English, in whcih the author grapples with the global dominance of English as the language not only of commerce but of literature. She details the uneven translation of literature into English and the translation of literature from English into local languages. She describes the historical tensions between universal languages and local ones like Latin and its vernaculars. But what I found most exciting was her focus on Japanese as a written language that embodies traces of its history in ways that other languages do not. She calls for more attention to local languages and a refusal to translate only ever into English or to encourage the world to learn English as a common language. (The irony is not lost on us, of course, that we read her book in English translation).

While I was a librarian briefly, I was also interested in starting up an international fiction book club, attentive to the idea brought up by many writers and critics that Americans by and large have very narrow reading tastes, not aware of bestselling authors in other countries and languages. This unevenness is a demonstration of a kind of cultural myopia, and I had hoped to start conversations at the library about literatures (in translation) that would offer radically different perspectives on the world than what American authors write. Of course, we wouldn't have been able to get into some of the really interesting stuff about translation and the difficulties of getting ideas to resonate in their full complexity across languages.
Collapse